The world recorded more than 26 million infected people, more than 866,000 died from COV, infections are increasing in many countries after a short period of stable disease.

The United States, the world’s largest epidemic region, recorded 6,295,884 cases and 189,901 deaths, an increase of 40,792 and 1,064 cases compared to a day earlier. Many colleges are starting to record high numbers of nCoV infections, just days after fall semester opens. New York City postpones reopening schools until September 21 to give schools more time to prepare.

At least 33 states in the US have refused to implement the new Covid-19 test guidelines issued by the US Centers for Disease Control and Prevention (CDC), which recommend no testing with people without symptoms. . Public health officials believe the United States needs more frequent testing, finding an asymptomatic carrier of nCoV to slow its spread, and CDC guidelines may increase the risk of skipping the necessary testing.

Stephen Hahn, head of the US Food and Drug Administration (FDA), on August 30 announced preparations for an emergency license for the Covid-19 vaccine before the end of the trial on thousands of people. US health experts oppose this proposal, saying they do not accept emergency use of any Covid-19 vaccine without reliable data on safety and efficacy from clinical trials. screening stage three. 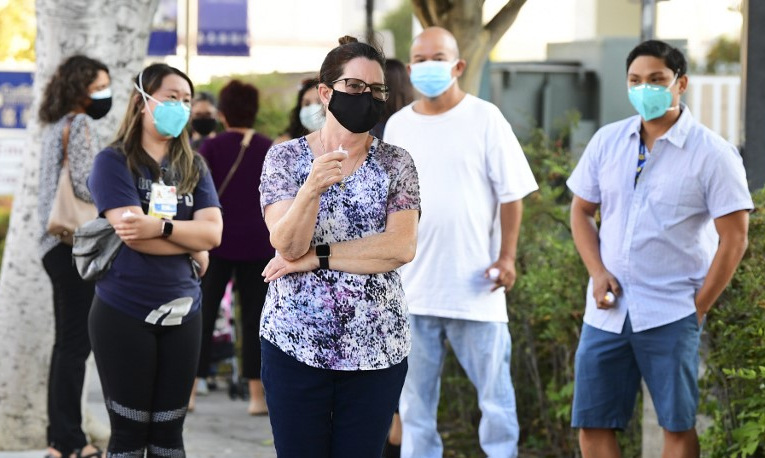 Medical staff commemorate those who died of Covid-19 in California, USA, on September 1. Photo: AFP.

Joao Doria, governor of the state of Sao Paulo, which is testing China’s vaccines, said officials will vaccinate people even if the federal government refuses to help. Relations between Governor Doria and President Jair Bolsonaro have been straining in recent months over how to handle the pandemic in Brazil. Bolsonaro blamed Doria for “killing the economy”, while the Governor accused the President of neglecting responsibility.

Despite much criticism on how to respond to Covid-19, President Bolsonaro unexpectedly received a record high support since the beginning of his term. He always took Covid-19 lightly and rejected the advice of the scientific community to reopen the economy quickly.

The Mexican government in August said there were signs that the country had reached its epidemic peak as the number of nCoV-related infections and deaths continued to decline, but acknowledged the fact that the actual figures were likely to be significantly higher. Officials further confirmed that Mexico plans to participate in the clinical trial of an Italian Covid-19 vaccine.

South Africa, the world’s seventh-largest epidemic region and the country most affected by the pandemic in Africa, recorded 630,595 cases and 14,389 deaths, up 2,336 and 126, respectively.

The World Health Organization (WHO) Africa Regional Director Matshidiso Moeti at the end of August said that the continent “seems to have reached its peak” with the number of new infections gradually decreasing. The South African government gradually eased restrictions to allow most sectors of the economy to reopen.

However, South Africa’s Health Minister Zweli Mkhize said their biggest worry is the possibility of a second wave of infections. President Cyril Ramaphosa also warned that infections could rise again if people ignore their guard.

Russia, the world’s fourth-largest epidemic region, reported an additional 115 deaths, bringing the total number of deaths to 17,414. The number of infections increased by 4,952, to 1,005,000. The disease situation in Russia appears to have been under control as the data tended to decrease. Series vaccination of Sputnik V vaccine for populations at high risk of nCoV infection will begin in November-December.

Russia on August 31st began lifting epidemic restrictions in most parts of the country as millions of students entered the new school year amid pandemic. The government’s anti-Covid-19 website says students will not be required to wear masks in the classroom, cafeteria or lunch break, but will have their temperature checked upon arrival at school.

It is compulsory for teachers and students to wear masks in the Russian capital of Moscow. All school staff in the capital had been tested for nCoV, officials said.

Spain, Europe’s largest epidemic region, has recorded a rebound in infections after a period of containment outbreaks. The country reported 479,554 cases and 29,194 deaths, an increase of 8,581 and 42 cases, respectively.

Spain requires children 6 years of age and older to wear masks in schools. Students must maintain a distance of 1.5 m from each other, only interact with classmates and must wash their hands at least 5 times a day. The capital of Madrid is closed c