Italy: The chamois mummy is exposed as the glacier shrinks and is carried down the mountain to study by helicopter. 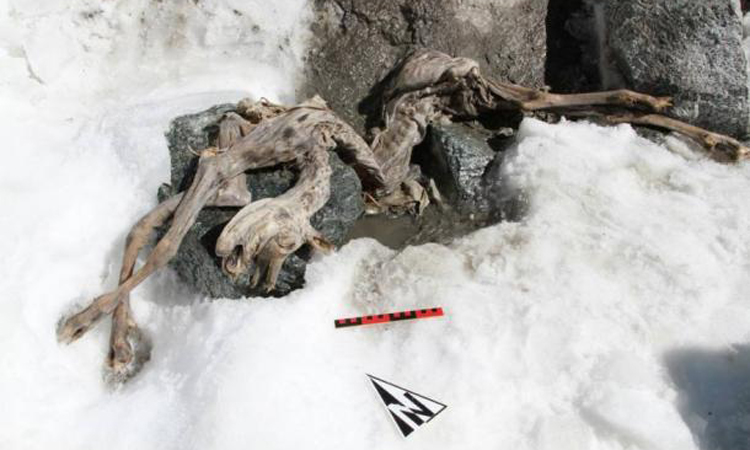 Hermann Oberlechner and other experts from Eurac Research Institute found ice mummies of chamois antelope in Val Aurina, South Tyrol, Alps, Ancient Origins on September 5 reported. The animal’s remains were preserved for 400 years and were only revealed when a glacier shrinks.

“Only half of the animal’s body is exposed in the snow. Its skin looks like leather, completely hairless. I’ve never seen anything like that,” described Oberlechner.

Experts carefully remove the surrounding snow, not hurting the antelope. They had a problem trying to bring it back to study because the discovery site was so inaccessible, it could only be reached by climbing for several hours.

The team of scientists asked the Italian Alps for help and was provided with a helicopter. The plane carried the chamois body down the mountain, to the Eurac Research Conservation Laboratory. Here, it is placed in the refrigerator.

With this special antelope, scientists can focus on studying DNA and how cold conditions affect it. “With repeated in-depth analysis, we will validate the changes DNA goes through as external conditions change,” said Marco Samadelli, conservation expert at Eurac.

The team of scientists immediately realized that chameleon could be helpful in developing new techniques for understanding the DNA of ice mummies. “Our goal is to use scientific data to develop a globally applicable set of ice mummy conservation rules. This is the first time animal mummies have been used in this way”, Albert Zink, an ice mummification researcher at Eurac, said.

Ice mummies are natural mummies because they are preserved under natural conditions and do not undergo the same treatment process as Egyptian mummies. The Eurac Research Conservation Laboratory, where chamois remains are kept, is focused on studying how ice mummies are preserved. The new discovery could help experts develop methods to ensure other mummies are well preserved, especially in terms of DNA.