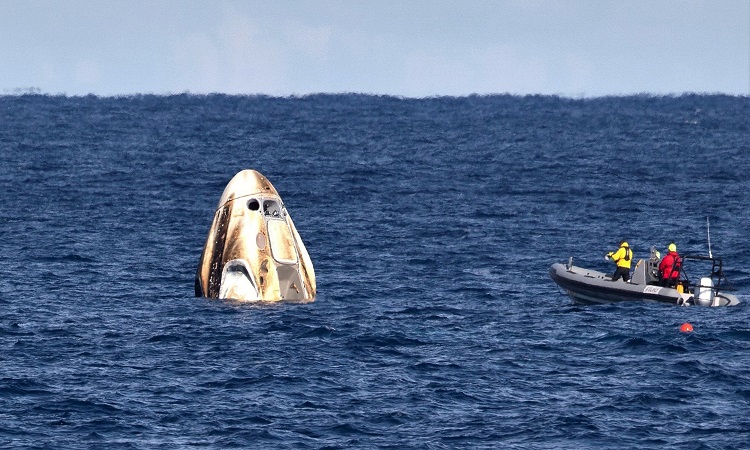 The recall team came to pick up the Endeavor. Photo: NASA.

SpaceX’s retrieval GO Navigator arrived at Endeavor and pulled the deck onto the deck shortly after the landing. After a series of checks, the support team opened the doors of the Endeavor and began to assess Behknen and Hurley’s health.

This is the first time an American spacecraft has landed at sea in more than four decades. The most recent landfall was in July 1975, when NASA astronauts Tom Stafford, Vance Brand and Deke Slayton ended the Apollo-Soyuz test project by landing in the middle of the Pacific.

The Demo-2 mission commenced on May 30. SpaceX’s Falcon 9 rocket carrying Endeavor from NASA’s Kennedy Space Center in Florida, begins a day-long journey to the International Space Station (ISS). It was the first manned flight to orbit from US soil after the shuttles stopped working in July 2011. Since then, the United States has relied on Russian Soyuz rockets to bring astronauts to the ISS at a cost of about $ 90 million per seat.

Demo-2 was the last test flight before SpaceX made the periodic commuter flights under a multi-billion dollar contract with NASA. According to NASA, experts will need to check the spacecraft’s data and performance during the test flight to complete the system certification for the Commercial Crew program. The certification process will take approximately 6 weeks.

Demo-2 went very smoothly, from takeoff to landing, according to Benji Reed, director of cargo handling at SpaceX. Launching converts large amounts of chemical energy into momentum while landing must safely convert kinetic energy into heat as Endeavor passes through the Earth’s atmosphere.