A pale blue water jet is prominent in the pilot’s photo from a height of over 150 meters.

Bryan Kasch, the pilot of a commercial helicopter, posted on social media a photo of the sea surface after Hurricane Laura swept through the city of Key West, Florida, on August 26. The storm formed near the Virgin Islands on August 21. A few days later, it swept through Key West and caused only minor damage.

Kasch’s shot from an altitude of about 152 m shows eddy vortex appearing in the waters near Key West. “I have seen a number of times the water changes color but not so impressive. However, I have been here for about 7 months, so I have not experienced any other storm,” he shared. 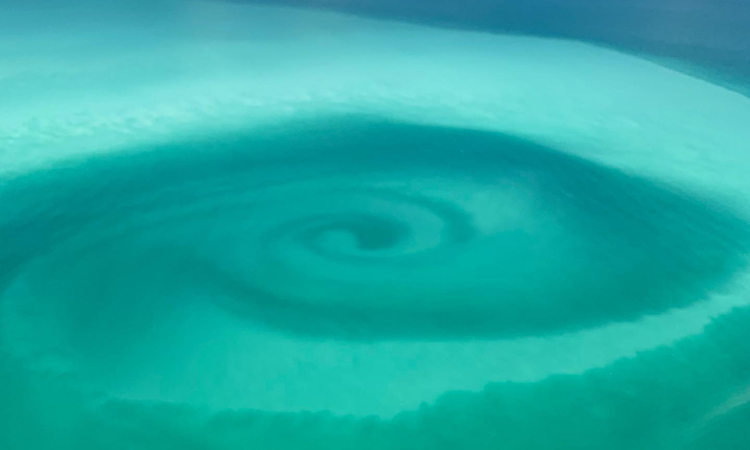 Vortex in the waters near Key West. Photo: Bryan Kasch.

Stable and continuous currents under the oceans are known as currents, according to the National Oceanic Agency of the US National Oceanic and Atmospheric Administration (NOAA). Sometimes the ocean currents can be interrupted and create circular currents called eddy vortices. Their swirling motion causes nutrients that are typically in deep, cooler water to float to the surface.

Eddy is also involved in hurricanes. Huge swirls of water contain a layer of warm water that contributes to the strength of the storm. According to a 2017 study, a large swirl of warm water that originated in the North Brazilian Current may have helped intensify Hurricane Matthew as it swept across the Caribbean Sea. This storm left more than 600 people dead in 2016.

“This study is important because the prediction of the intensity of some recent hurricanes in the Caribbean underestimates their rapid strength when passing through warm ocean structures,” explains author Johna Rudzin. like when publishing research.