Kingsley Coman scored a valuable goal, helping Bayern beat PSG 1-0 in the final, on the evening of August 23.

PSG showed that they are well prepared to deal with the opposing pressing style. The speed of strikers helps the French team be ready for situations that change from defence to extremely fast attacks. They also actively exploit the space behind the opponent’s defence, when the two full-backs of Bayern are often high. 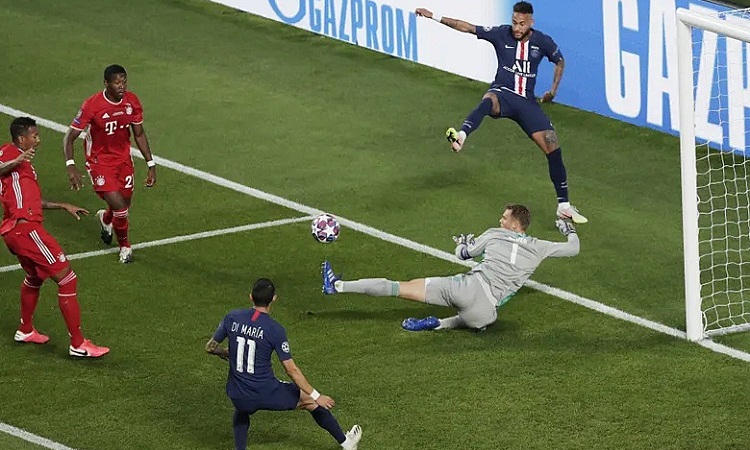 That approach to the game helps PSG maintain certainty in the defence while creating a permanent danger in the Bayern field. The first chance came to Thomas Tuchel’s team when Neymar moved wisely to catch Kylian Mbappe’s slot. But the cross-corner left-footed shot of the Brazilian striker was blocked by Manuel Neuer.

Bayern tried to control the game, but despite holding many balls, the German team struggled to focus on defending. Exploded and scored twice in the semifinals but Serge Gnabry was locked on the right flank while Thomas Muller was also faint. The bright spot in the Bayern attack came on the left wing – a position where Hans-Dieter Flick surprised Coman to start instead of Ivan Perisic as always.

Bayern’s two chances in the first half both came from wing crosses. Alphonso Davies slipped into the penalty area where Lewandowski turned and volleyed to the ground. The ball was out of reach of Keylor Navas but hit the post. After 10 minutes, the Polish striker had a chance again, but his header was blocked by Navas.

Neuer blocked Neymar’s pass to Di Maria in the first half. Photo: EPA.

In the other goal, Neymar played very determinedly. His dribbling opened the door for Angel Di Maria to hit Ander Herrera, before kicking the right foot into the bar in an empty situation. 25 minutes, Bayern lost when Jerome Boateng had to leave the field due to injury. The veteran midfielder’s absence affects the ability to develop the ball from the home field of Bayern.

With that in mind, PSG pressed enthusiastically towards the end of the first half. Their efforts paid off when Alaba failed to pass, to Neymar’s feet. After a few passes, the ball reached Mbappe’s foot. But the finish of this striker was too gentle and was captured by Neuer. During injury time, the referee refused to give Bayern a penalty after Coman was dragged down by Kehrer in the penalty area.

The match speed dropped in the second half. Both teams play cautiously, waiting for the opponent’s mistakes. In that tug of war, Bayern took advantage of a glimpse of the opponent’s defence to open the score. The PSG squad was in turmoil as midfielders Thiago Silva and Presnel Kimpembe both dashed to clear the ball after Gnabry’s cross. Kehrer has one to two in the back. Observing very quickly, Kimmich hung the ball and hit Coman’s position so that this player comfortably hit his head diagonally, beating Navas.

Immediately after this phase, from a similar cross, but this time from Muller’s foot, Coman finished passing the ball in front of the PSG goal. Having been led, PSG had to push up, but their ball phase still lacked a certain seamless. A moment of Di Maria’s genius brought the opportunity for Marquinhos, but Neuer excellently used his foot to stop the PSG player’s cross-corner shot.

Neymar’s efforts only make PSG fans more regretful. The Brazilian striker broke the bar in one shot in front of the penalty area. In stoppage time, Neymar moved behind the Bayern defence to catch Mbappe’s pass. But his turn to finish off the post. It was the last dangerous situation PSG created.