Former Japanese Foreign Minister Fumio Kishida, who is running for the position of prime minister, was criticized after posting a Twitter photo of his wife standing by the dining table serving her husband.

The photo, posted by former foreign minister Kishida, 63, on August 31, shows him dressed in a fully-fledged suit, sitting at the dining table with a set of rice dishes prepared, while his wife, wearing an apron, standing by the edge of the table. .

Kishida added under the photo that he was grateful to his wife for traveling from his hometown 800 km to Tokyo to support her husband, after he ran for the presidency of the ruling Liberal Democratic Party (LDP) to replace the Prime Minister. General Shinzo Abe.

However, Mr. Kishida was immediately criticized harshly because the image of his wife in the photo was viewed by many people as a “servant”. “I thought it was an owner and a maid, or maybe a guest in a restaurant and a waitress,” said an account.

“It was terrible to see this. It gave me the impression of a waitress waiting for him,” said one social media user who claimed to be an LDP supporter. 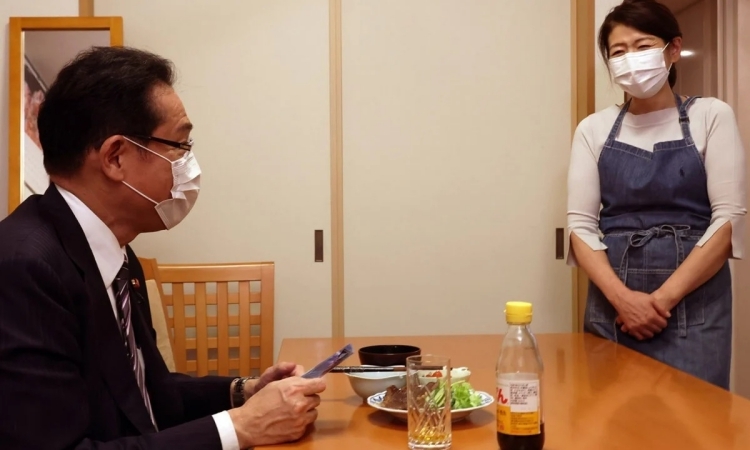 Other accounts on Twitter suggested that Mr. Kishida could improve his self-image by posting pictures of the couple having a happy meal together. Some also said that the former secretary of state probably did not expect the photo to cause such serious criticism.

“Kishida struggled to present itself as a more progressive part of the LDP, representing the party’s more liberal faction, but this ruined that image,” said Noriko Hama, professor of economics at the University. Doshisha of Kyoto, said.

Hama added that Mr Kishida’s inspirational photo can have a lasting effect as it will always be seen as an example of the former diplomat’s attitude….